Bollywood actor and producer Anushka Sharma recently shared an endearing picture on her Instagram where she is seen lovingly cradling her baby bump. Anushka Sharma and Virat Koli are expecting their first child in January 2021. 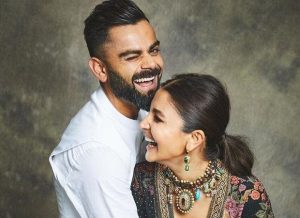 This beautiful picture captures Anushka at a beach, smiling and looking at her baby bump with motherly love. The Phillauri actor wrote a heartwarming caption saying,”Nothing is more real & humbling than experiencing creation of life in you . When this is not in your control then really what is?”

Nothing is more real & humbling than experiencing creation of life in you . When this is not in your control then really what is ?

Cricketer Virat Kohli was among the first ones to comment on the post. He said, “My whole world in one frame.” This aww-dorable comment once again proves that Virushka are major couple goals! 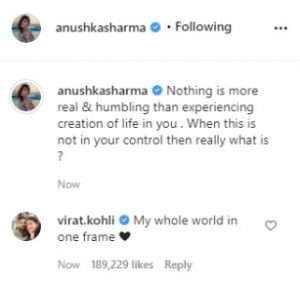 Anushka Sharma’s post received a lot of comments not just from Virat and fans, but Bollywood celebrities also showered the couple with their good wishes and blessings.

Kareena Kapoor wrote a heartening comment saying,“Bravest of them all❤️.”

Made in China actor Mouni Roy also commented on the post and said, “Beautiful humans ❤️❤️”. Other celebs like Tahira Kashyap, Zareen Khan, Jaqueline Fernandez, Dia Mirza and several others complimented Anushka on how beautiful she looked and expressed their best regards.

Virat Kohli and Anushka Sharma had shared their good news and announced the pregnancy with the world through their social media on August 27, 2020. Sharing a picture of themselves the couple said, “And then, we were three! Arriving Jan 2021 ❤️🙏.”

Virat Kohli and his IPL team Royal Challengers Bangalore had celebrated Virushka’s pregnancy news in Dubai ahead of IPL 2020. RCB’s official Instagram page shared the video of the Team Bonding session where they celebrated Virushka’s good news by cutting a cake and even congratulated Yuzvendra Chahal on his engagement news. 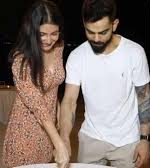 Anushka Sharma was last seen on the big screen in 2018 romantic drama along with Shahrukh Khan and Katrina Kaif in Zero. Although in the recent past, she has  been doing a lot of praiseworthy work as a producer.On OTT platforms like Amazon Prime Video and Netflix produced two releases- Pataal Lok and Bulbbul.