Bollywood and its love for Ganesh Chaturthi and Anant Chaturdashi has been immense since time immemorial. This 10 day long festival was celebrated from Saturday August 22, 2020 till September 01,2020. However due to the ongoing pandemic, we didn’t get a chance to extend a grand welcome to Bappa.

But, as we bid adieu to Bappa and pray for him to take away all the negativity and sorrows from the world, here is a list of 6 joyous and heart-warming songs from Bollywood that will make the farewell to the modak king a pleasing experience!

The iconic crime-drama film, ‘Agneepath’ released in 1990 starring Amitabh Bachchan, Mithun Chakraborty, and Neelam had a super energetic song,’Ganapati Bappa Apne Haon Chale’  that still makes our feet dance whenever we listen to it. With the strong and melodious vocals of Sudesh Bhosle, Kavita Krishnamurthy, and Anupama Deshpande, the song was written by Anand Bakshi and composed by Laxmikant-Pyarelal. This song is an absolute delight to Bappa lovers and makes Ganapati Visarjan filled with the zestful fervour of the festival.

You can  listen to this iconic song here- https://youtu.be/XijfnwNpfsw 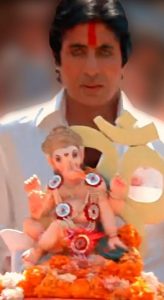 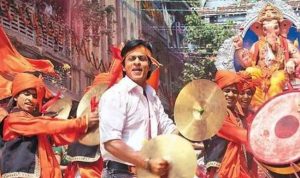 The neo-noir 2006 film, Don-The Chase Begins Again starring Shahrukh Khan, Priyanka Chopra and Kareena Kapoor is the remake of Amitabh Bachchan starrer Don released in 1978. This is one of the most vigorous Ganapati Visarjan songs sung by Shankar Mahadevan and the words of Javed Akhtar and the music composition by  Ehsaan Noorani, Loy Mendonca, Shankar Mahadevan. The combination of the music and the high-spirited picturization of the Anant Chaturdashi makes it a must to be enjoyed during the festival.

The soulful track ‘Deva Shree Ganesha’ was picturised in the action-drama film, ‘Agneepath’ in 2012 starring Hrithik Roshan, Priyanka Chopra, Sanjay Dutt, and Rishi Kapoor.The song begins with bells of different pitches fused together and then the introduction of percussion. It is beautifully sung by Ajay Gogawale and the composed by the dynamic duo Ajay Atul. Deva Shree Ganesha resonates as a devotional song with the viewers also because of the meaningful lyrics by Amitabh Bhattacharya and licensed by Sony Pictures. It is the melody of this song that fills our hearts with positivity and love for Ganapati Bappa.

You can hear the song here:https://youtu.be/RYqJ5w-GrfM 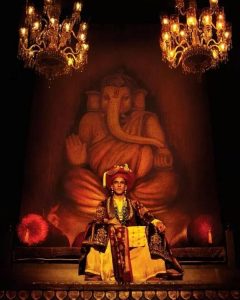 The epic-historical romance film, ‘Bajirao Mastani’ directed by Sanjay Leela Bhansali starring Ranveer Singh, Deepika Padukone and Priyanka Chopra features this harmonious sacred-prayer song dedicated to Ganapati Bappa, the lord of intellect and wisdom. This awe-inspiring song is sung by the rhythmic voice of  Sukhwinder Singh with the lyrics by Prashant Ingole and the music was composed by Shreyas Puranik.

This thumping festival song starring Riteish Deshmukh in the musical masterpiece movie Banjo, which released in 2016. The powerful and iconic voice of Vishal Dadlani does complete justice to the lyrics of Amitabh Bhattacharya. The fusion rock song composed by Vishal-Shekar turns the festive mood on and makes us chant ‘Ganapati Bappa Morya!’ One of the highlights of the song is the face of Ganapati Bappa painted on Riteish Deshmukh’s hands. The movie also marks the directorial debut of Ravi Jadhav. 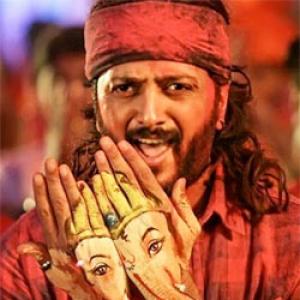 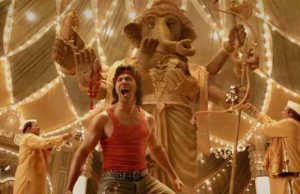 (Still from this song featuring Varun Dhawan from Judwaa 2)

As Lord Ganesha leaves for his home, with a heavy but yet hopeful heart, choose your favourite song from this list and extend our friend Lord Ganesha the warmest farewell with a wish to welcome him once again next year with grandeur celebrations like never before!