Priyanka Chopra Jonas celebrated her 38th birthday yesterday. While the actress is in the U.S, stars from all across bollywood and tv industry wished the global icon through their social media platforms.

Deepika Padukone wished Priyanka and said “Wishing you a Lifetime of Happiness”. 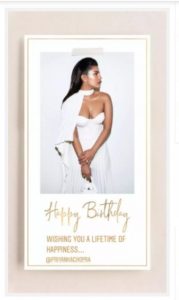 Priyanka’s Sky is Pink co-star, Farhan Akhtar also wished her by sharing a picture from their shoot in the ocean.”Happy birthday @priyankachopra .. may your sky always be the colour you choose .. big hug,” he wrote. 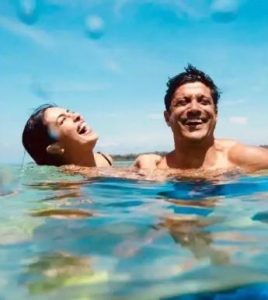 Bhumi Pednekar who shares her birthday with Priyanka wished her buy sharing a selfie with the actress. 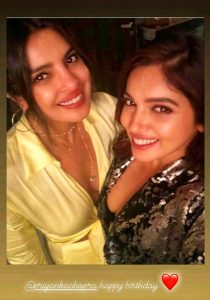 Sultan actress, Aniushka Sharma also wished the Jamshedpur beauty on her instagram. She shared a still from their movie together, ‘Dil Dhadakne Do’. ““Happy birthday Priyanka. You’re strong, a fighter and inspiration to many. Here’s wishing you a splendid birthday” she said. 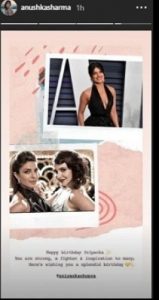 Dedh Ishqiya actress, Huma Qureshi who had been invited by Nick Jonas and Priyanka Chopra to the Canne’s exclusive party wished her ‘girl crush’ a very happy birthday. 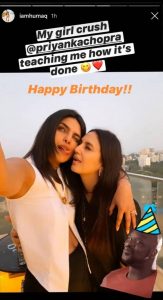 Priyanka’s Aitraaz Co-actor Kareena Kapoor Khan posted a picture of Priyanka and her from the sets of ‘Koffee with Karan”.She captioned it as “Happy Birthday @priyankachoprajonas. May you continue to inspire the world.Hugs from accross the globe..”

Sonam K Ahuja also shared a picture on her story where she is seen hugging Priyanka at an award show red carpet. She captioned it by saying: “Happy Birthday Priyanka. I hope you have a fantastic day today and I can’t wait to meet you in person.” 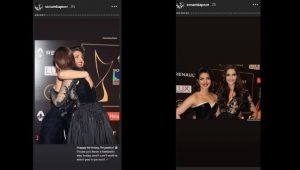 Katrina Kaif wished the “unstoppable” Priyanka through an instagram stroy and thanked her for being a source of inspiration for so many people. 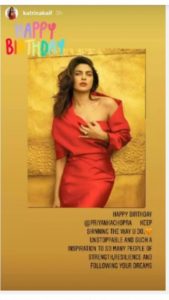 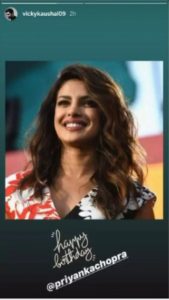 Popular celebrity Fashion Designer also wished Priyanka Chopra on his instagram with pictures from one of his fashion show events.

Madhur Dixit posted a boomerang of the two actresses together from the sets of a reality dance show to express her love and greetings for Priyanka on her birthday.

It's always fun when you are around! Sending you my love & best wishes for your birthday @priyankachopra. May this year be bigger & better. Go girl power as we reach out and conquer the world. Keep inspiring everyone to chase their dreams. Happy Birthday ❤️

Television celebrities who wished Priyanka Chopra too on her birthday:

Popular reality show host, Maniesh Paul wished Priyanka through his instagram and called her a ‘rockstar’.He posted a still from one of the award shows that the tere bin laden actor hosted wherein the Barfi actress is seen on stage with him.

The Yeh Rishta kya Khetlata hai and Bigg Boss Season 13 fame, Hina Khan also posted an instagram story to wish her ‘role model’ on her birthday.Both Priyanka Chopra Jonas and Hina Khan made their Cannes debut in the same year(2019). Hina Khan was all praises for the Quantico star about how humbly she greeted and treated her. 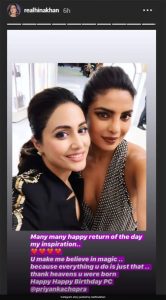 Not only did the film and television industry wish Priyanka, but also there was an overflowing amount of birthday  love from her Jonas Family including PapakJonas, Kevin Jonas, Danielle Jonas, and even from her dog Diana.

Priyanka’s mother, Madhu Chopra and her borther Siddharth Chopra also wished the Baywatch actress on instagram with adorable captions and rare pictures of the actress from her childhood.

Happy birthday to a sister, a friend, a guardian. Through thick n thin always. Fighting, competing, making up but still always together. Wish you lots of love and a very happy birthday didi. Miss you loads🤗🎊🎉

Although, one of the most awaited and sweetest wishes was from Priyanka’s husband husband who posted a romantic picture of the couple looking dreamily into each other’s eyes. He captioned it as: “….Happy Birthday Beautiful.”

Priyanka Chopra’s team shared a series of this heartwarming wishes from her family:

Priyanka was last seen alongside Farhan Akhtar in the 2019 film, ‘The Sky is Pink’. Her upcoming projects inlcude Mindy Kaling’ s wedding comedy and Matrix 4. Priyanka Chopra also signed a signed a ‘two-year multimillion-dollar first-look television deal’ with Amazon. She will also seen in a Netflix movie,” White Tiger” opposite Rajkummar Rao.

We wish Priyanka Chopra all the luck and success for her future endeavors!

Previous Popular reality show host, Maniesh Paul shoots without a ‘Live audience’, due to Covid-19
Next Shakuntala Devi E-Promotions: Vidya Balan is breaking the internet with her looks!