Maharshi, a 100 crore budget movie.Maharshi is a reality check story where the story revolves around Rishi (Mahesh Babu) who is in search of success in his way. 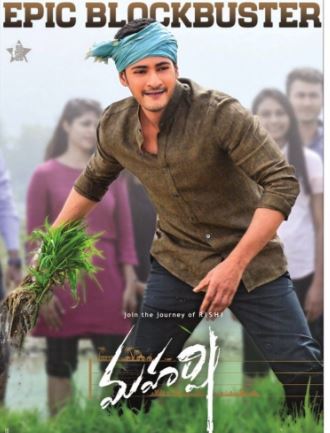 Allari Naresh as Ravishankar– a farmer who loves his village

Rishi’s father – who is portrayed as a successful failure

With this fantastic group of actors Vamshi Paidipally lead the movie so beautifully that just made the audience awestruck.

The movie begins with Rishi being given the post of CEO of the Origin company and becomes the youngest billionaire. A surprise success party is thrown by his assistant gathering all his classmates, and his childhood friend Kanna and then the flashback rolls into the screen.

Rishi gets admission for Mtech course in IIET, Vizag. Their Ravi turns out to be a roommate and loyal friend. Pooja, Rishi, and Ravi become the best of friends. Pooja and Rishi’s relationship comes to an end. Ajay lays a trap for Rishi. He manages to put Rishi in trouble as the accused. Ravi surrender’s himself as the traitor and releases Rishi (who is unaware of Ravi’s sacrifice). Out of grief, Rishi sets out to meet Ravi. Things in Ravi’s village, Ramavaram turn to heat as the village needs to be cleared out for a gas project.

I leave the rest of this blockbuster for you to watch!

Words are hard to explain the movie as it is a beautifully woven and scripted story with a lot of determination and compassion.

Mahesh Babu’s performance is remarkable and one of his best roles he has played till date.
Allari Naresh has a vital role in the movie, and he has beautifully nurtured the character of a true friend.
Indeed, Jayasudha has played the backbone and motivator of Mahesh Babu at some critical scenes.

The movie is filled with all kinds of emotions which show the aspect of success being limitless and that success no definition to itself unless he believes he has achieved.
On the whole, this movie has high moral values and is high on inspiration.

Apart from all the positives, the most concerned area is its duration, this 3-hour long movie has definitely made its duration felt.

Despite the shortcomings, this blockbuster movie is certainly worth a watch. It is definitely the money you put in as the movie has a social message to tell.

Nowadays, movies are more appreciated when they portray social issues, and social messages and Maharshi is definitely a movie of this genre and this movie has definitely put reality on the check.

Previous Kabir Singh to release soon!
Next BREAKING NEWS: Deepika Padukone and Prabhas to work together in Nag Ashwin’s Next Film