As Unlock 1 resumed, the dormant entertainment industry has once again begun to beam with activity. Several  television and film artists have now started shooting with all the  safety measures and precautions in place due to the global pandemic.Popular TV show host, Maniesh Paul who also is the host for Zee Tv’s reality show SaReGaMaPa Lil champs shared his experience of shooting on set after a break of four long months. 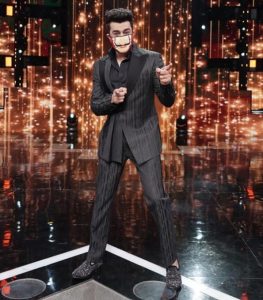 Precautions on the sets of Live show SaReGaMaPa Lil Champs:

The Tere Bin Laden 2 actor, in an interview with MumbaiMirror shared how the process of shooting has changed. He said that before entering the set, everyone’s temperature and oxygen levels were checked by a doctor on set.

During the shoot, the entire crew had to follow socially distancing and use of sanitizers was compulsory, said the Mickey Virus actor.He also informed that they had to sanitize their hands before entering the vanity van, which was sanitized beforehand. The comedian also expressed that they had to keep the masks on,until the camera rolled.

The ‘sad’ part about shooting Reality show during Covid-19:

Maniesh Paul expressed his grief that the crew and artists could no longer greet each like they used to by hugging and shaking of hands. He and his interactions with the live audience during reality show shoots always used to crack us up. However, no longer that will be possible. As he mentioned in the interview the ‘sad’ part about shooting for live show now is that there is ‘No Live Audience’. Due to the Covid-19 situation in the country, the protection measures do not allow large gatherings. This is why all the shoots that have commenced have minimal cree on set who have to follow all the safety  norms set by the government.

Maniesh Paul went back on sets of the reality show after a long time and he expressed his joy through an instagram post.

He took to his instagram to share his ‘masked’ look from the sets of the live show. He even termed the NEW NORMAL of shooting amid COVID-19 scenario as the – ‘Hustliyat’. Indeed, it is a lot of hustle to produce entertaining content while following all the safety protocols and guidelines.

Manjesh Paul is known for his quick-wittedness and sense of humour.His body of work in reality shows like Jhalak Dikhla Jaa, Movie Masti with Maniesh Paul, Indian Idol etc speaks for itself.

Similarly, using a witty play of words he refers to the use of #SanitizedHumour on the live show in these turbulent times of the pandemic

The made in China actress, Mouni Roy commented on his post and wished him good luck.

Gaurav Gera, who is famously known for his character ‘Adoo’ also commented on the post. He said,” All the best paul saab!”

Maniesh Paul also shared a video on his instagram that the reality show SaReGaMaPa Lil Champs will be back on the audience’s tv screens from July, 18th,2020.

Although, the process of shooting has been hard, but we know that the young singing champs will keep us hooked!

And Maniesh Paul’s hosting shall definitely be the icing on the cake, Iike always!

Let the melody of music and fun begin!

Previous “ENOUGH IS ENOUGH” says Rhea Chakraborty breaking her silence on the Rape and Death threats
Next Happy Birthday Priyanka Chopra: Wishes pour in from Bollywood as the Desi Girl turns 38