Ever since Sushant Singh Rajput untimely demise on June 14, 2020 the entire country is in shock. His fans and netizens have been expressing their grief and anger on social media and demanding justice for the late actor. However, some of them have gone over the board and are hurling insensitive comments, abuses and rape threats to a lot actors in the industry on social media. Sushant Singh Rajput’s alleged girlfriend, Rhea Chakraborty has become a major target of all the bashing on social media. 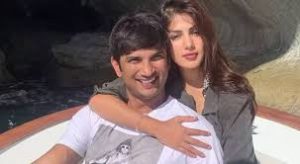 Rhea Chakraborty had been off social media post the Raabta actor’s alleged suicide. However, after a month since Sushant’s death, the actress took to instagram to finally open up and shared an emotional post for him.

The Mumbai police has been investigating the case and there is no final verdict out yet. There have been a lot of theories doing rounds and the nepotism debate has once again made headlines claiming to be one of the major reasons for Sushant’s depression.

However, in a recent post, Rhea broke her silence on all the backlash she has been receiving. She posted the screenshot of an insensitive message sent to her by a user @mannu_raut. The user abused her and openly gave her rape and death threat if she didnt commit suicide.

“I was called a gold digger …I kept quiet.

I was called a murderer…I kept quiet.

I was slut-shamed… I kept quiet.

But how does my silence give you the right to tell me that you will get me RAPED and MURDERED if I don’t commit suicide @mannu_raaut?

Do you realize the seriousness of what you have said? These are crimes and by law no one, I repeat NO ONE should be subjected to this kind of toxicity and harassment.’

She even went ahead and tagged the cyber crime bureau to look into the matter and take the required step against such hate-mongers and ended her post with : “ENOUGH IS ENOUGH”.

Many celebs from the industry including the dum laga ke haisha actress, Bhumi Pednekar came out in support for rhea chakraborty and told her to stay strong.Even MissMalini consoled her and used the hashtag #IgnoreNoMoreOnline in her comment to such abuses, rape and death threats to celebrities on social media.

The audience should refrain from spreading such negativity and not indulge in such toxic behavior as it doesn’t help, and rather diverts the attention from the concerned issue.

Previous Fire broke out on the sets of Zee Tv’s KumKum Bhagya amidst shoot
Next Popular reality show host, Maniesh Paul shoots without a ‘Live audience’, due to Covid-19