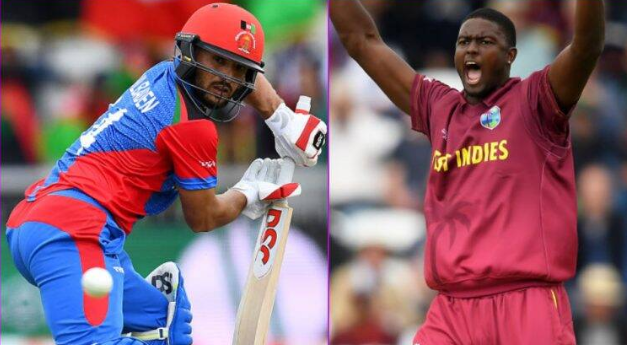 ICC World Cup 2019, London: In their last league match of the tournament, Afghanistan look to finish the game on a winning note when they face Windies in 42 nd match at Headingley here on Thursday!

Both West Indies and Afghanistan performed poorly in this world cup and been knocked out of tournament very early. But interestingly prior to the world cup, they looked strong and registered victories against top reams. But both teams couldn’t sustain competition and knocked out of the tournament due to their weak and poor performance.

Though this match is considered as a low profile contest, it will be interesting to see whether Afghans will be able to finish the tournament with a win or not.
Afghanistan Team Updates :

Due to controversies and injuries, the Afghanistan side suffered heavy blows in this world cup. Though they have innumerable of talents, they couldn’t perform up to their standards.

Despite giving some scares to top teams like India, Pakistan, and Sri Lanka, they haven’t won a single game in this tournament.

So now, nothing to gain or lose, they will look to finish their last game with a win. Currently, they were placed last in the points table and will be hoping to win this last game.

On the other hand, Windies has already knocked out of the World cup due to low points. They are coming into this match after a disappointing loss against Sri Lanka despite a sensational hundred from Nicholas Pooran.

Windies suffered a major blow in the form of Andre Rusell who suffered a nasty blow and ruled out of the tournament.

Opening batsman Chris Gayle, who will play his last world cup match will be looking for a strong start to finish his ICC career on a high note.
Century hero Nicholas Pooran will be looking to continue his form and Fabien Allen will continue as team’s leading spinner.

Apart from all-rounders Holder and Brathwaite, they will be backed by pacers Oshane Thomas, Sheldon Cottrell, and Kemar Roach to trouble the Afghanistan batsmen.

As we expect some rain for this match, the new ball will provide some swing and pace to the fast bowlers.

According to pitch and weather conditions, the captain who wins the toss might choose to bowl first to gain the advantage of pace and swing from the pitch. As the match progresses, it might provide some turn which favors the spinners.

Spinner Hamid Hassan was injured in the last match due to a hamstring injury. Another spinner Sayed Shirzad might replace him in this match.

No changes were expected from the West Indies team. They might go with the same squad which played against Sri Lanka.

According to recent form and performance, the Windies team has high chances of winning this game. But we cannot take Afghan side lightly as they have a past history of giving scars to major teams like India, Pakistan, and Sri Lanka.

But for this match, we are going with West Indies to win this match.