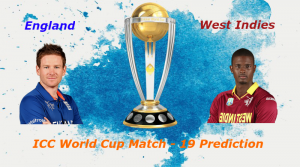 England and West Indies have got to a tremendous start in the World cup 2019. England lost their second match against Pakistan but came back strongly against Bangladesh.

On the other hand, West Indies have been impressive in their first two matches. In their last match, they lost against Australia but looked very impressive in many areas. They failed to grab their chances against Aussies but took the game to till the very end.

In their last match, Opener Jason Roy excelled with his performance by scoring a century against Bangladesh. Their openers put up a brilliant hundred run partnership on the board. England, led by captain Eoin Morgan was very confident that they look to stun former champion Windies in next match.
On the other hand, the England bowling unit was not so impressive. Their primary bowlers like Plunkett and Mark Wood need to perform well if they need to score a win against West Indies.
The only added advantage for England is the inclusion of Jofra Archer into the squad.

On the other hand, Windies look so impressive in all departments. Before the beginning of the tournament, no one ever has expectations on the Caribbean team. But now, windies have been one of the strong contenders to win this tournament.

Their last match against South Africa was abandoned without a single ball.
Coming to this match, Windies might find the tough task to wrap up English batsman as they were in beast form.

They need to highly depend on their fast bowlers like Oshane Thomas and Sheldon Cottrell.

The temperature here at Southampton is expected to be cloudy. Rain might play a spoilsport during the match. Due to this windy and overcast conditions, we might not expect a full game!

Due to overcast conditions, the pitch might become soggy which eventually helps seam bowlers.
England vs West Indies toss prediction:

According to weather and pitch reports, the captain who wins the toss might choose to bowl as it mostly favors seam bowlers. They might take advantage of these overcast conditions due to the slow outfield.

No changes were expected from the English squad. In the last match, England wicket-keeper Jos Buttler was injured during batting. But as per the latest reports, he seems to be fit for this high profile match.
Tom Curran might replace Mark wood, whose performance was not up to the mark in this world cup.

West Indies team will remain the same as no changes were expected from team management. Though Windies have plenty of options to change the squad, they might stick to the same team who played against South Africa.

By going through the stats, hosts England have crystal clear edge on Windies team. But we have to notice one thing that West Indies has been in strong form in this tournament. Their bowling unit was one of the best in this world cup. Additionally they ahs power hitters like Chris Gayle, Hetmyer and Russell.
On the other hand, England has been dominant in world cricket for four years. So we are going with England to win this match.