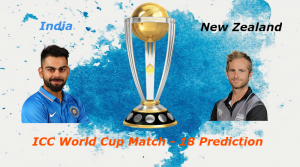 India and New Zealand, probably two table toppers will look to improve their standings to gain the upper hand in the ongoing world cup. Both teams look super strong when coming to their recent form and performance.

Right now, India is at the third position in the points table with two wins coming against South Africa and Australia.

India has struggled in swing bowling against New Zealand in a warm-up game and the batsman has to ensure they need to perform well against swing bowlers.

In last ODI, Indian batsman shined throughout the innings. Openers Rohit and Dhawan made an excellent partnership while captain Kohli and Hardik Pandya contributed enough runs on the board.

Coming to the bowling unit, it was one of the best attacks in the world. They have been well disciplined and always managed to pick wickets in crucial situations whenever the team requires.

Up to now, New Zealand has managed to defeat small teams in the tournament. On Thursday, they will face one of the strong team in the form of India. It will be a big test for their batsman and bowlers when they face India.

Martin Guptill and captain Williamson are the key players for Kiwis. Especially batsman Ross Taylor has been in great touch in this tournament.

New Zealand’s bowling has been excellent in three games and one might argue that it was against weak teams.

They will face a test when they come across the world-class players like Kohli, Rohit Sharma, and Dhoni. Particularly, pacer Trent Boult and Mark Henry are in excellent form and they are swinging the ball and generating a lot of seam movement from the pitch.

Heavy rain is expected here at Trent bridge for this match. The maximum temperature might be around 13 degrees with 90% cloud cover. So it was foolish to expect full match here at Trent Bridge.

This pitch is always favorable for batsman but due to overcast conditions, it might help the fast bowlers big time.

As per weather and pitch reports, the captain who wins the toss might choose to bowl as this pitch might not yield as many runs in this match due to rainy conditions.

Opener Shikhar Dhawan injured his right thumb during India vs Australia match. Due to this, he was ruled out of the team for three weeks. He will be under medical examination for these three weeks. Another specialist opener K.L Rahul might replace injured Dhawan.

For No.2 position, team management looking on Dinesh Karthik and Vijay Shanker.

On the other hand, the Indian bowling unit was looking powerful with the likes of Bhuvi, Bumrah, and Shami.

No changes were expected from the New Zealand team. Their key players were in good form with the likes of Guptill, Williamson, Ross Taylor, Trent Boult, and Matt Henry.

As per our prediction, this match is going to be a close affair between both teams. But we are going with India to win this match as they were in great form, particularly with bat and ball.

Their recent form and performance looks very impressive when compared to New Zealand.