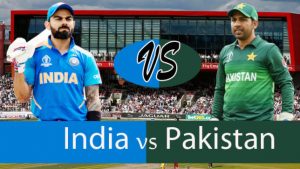 As we all know India and Pakistan share a thrilling and intense history of cricket in world cup. However, this time rain might play a spoisport in this blockbuster clash. But if all goes well, we might see an intense and nail-biting thriller here at Trafford. While India are unbeaten at world cup, pakistan have a win in their account against hsots England.

India team want their top order to fire against Pakistan as opening partnership has been the main key to their success. As KL.Rahul replaced injured Dhwan, he must look to grab the chnace to cement his place in the squad.

Without no doubt, Kohli will be playing a key role in this match as he is looking in best shape.

Jasprit Bumrah will be the key bowler for India in this match as his seam and pace may cause enough troubles for Pakistan.

In this world cup, pakistan opener Fakhar Zaman hasn’t been among the players who score runs and he is so keen to do against India. Meanwhile, Babar Azam, the key player of pakistan batting lineup will try to play an important role in this epic match.

On the other hand, Pakistan bowling unit is tremendous form with likes of Amir, Wahab Riaz and Hasan Ali. Pakistan team is loking for another stand out performance from Amir. So the duo of Riaz and hasan Ali should play a vita role to stop the Indian batsman. Apsrt from batting and bowling, Pakistan’s fieldind has been very poor in through the tournament.

This match is likely to be affected from rain as the light rain showers are expected in the second half of the match. So the sun is expected to come out in the afternoon. most of the cloud cover is above 75%, which likely palys a spoilsport to the match.

The pitch in Old trafford is expected to turn where the spiinners might play a key role in picking wickets. We might not expect any swing from the new ball but the overcast conditions might help bowlers.

By going through the pitch and weather reports, the captain who wins the toss might choose to bowl to gain the advantage of overcast conditions.

We all know that opener Shikhar Dhawan is surely miss out this match due to ijnjury. K.L rahul has replace Dhwan who will open the innings with rohit Sharma.

And it is been a question whether Kohli opts for Vijay Shanker or he goes with Dinesh Karthik in middle order.

According to reports, no changes were expected from Pakistan team. They might go with the same squad which lost the previous encounter to Australia.

Players To look Out for:

When it comes to the ICC World Cup, India have complete domination over Pakistan from many years. But going through the stats, Pakistan has close edge on India irrespective of their performance in world cups. But as far as concerned, pakistan has not been in great form many months. On the other hans, Idia ha been backed as one of the contenders for the worl cup. So we are going with India to win this match.