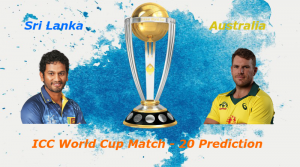 Australia and Sri Lanka are in good forms as they won their previous matches against Afghanistan and Pakistan.

While Sri Lanka’s previous match was washed out due to rain, Australia comes into this match after their impeccable win against another Asian team Pakistan.

Opener Kusal Perera and Dimuth Karunaratne are very important to Sri Lanka’s chances against mighty Aussies as their middle order’s performance is not up to the mark. Both Angelo Mathews and Kusal Mendis have failed with the bat and would want to perform better against Australia.

On the other note, Sri Lanka was expecting some fierce bowling from Lasith Malinga and Nuwan Pradeep. Bue due to a finger injury, pacer Pradeep might not play this match which brings another misfortune for Sri Lanka.

Australia bounced back very strongly after their loss against India. By winning this contest, they once again proved that they are one of the strong contenders for this world cup.

In this match, opener David Warner hits his first century since being banned from international cricket last year due to ball- tampering scandal.

On the other hand, Aussies bowlers came back strongly against Pakistan after their poor show against India

Their bowlers held their nerve to win a fantastic match here at Taunton. They looked very strong in all departments and it will be no shocker if they beat Sri Lanka in their next match.

As we all know, some of the group matches have been abandoned due to heavy rains in England. For this match, we can expect rain with little showers throughout the match. Due to this scenario, the outfield might become soggy and wet which might play a spoilsport to the game.

Actually, Kennington pitch is favorable for the batsman as we already have seen in India vs Australia match. We might easily expect 300+ scores in this match. But due to heavy rains, this pitch might assist seam bowlers.

According to weather and pitch reports, we might expect a high scoring match. So the captain who wins the toss might choose to elect to bowl and can gain overcast conditions.

No changes might expect from the Sri Lankan team. They are very confident on present XI as they are in good form in the previous match against underdogs Afghanistan.

Nuwan Pradeep was fit for the match as he was ruled out of the last match due to injury.

Aussies pacer Nathan Coulter Nile disappointed his side to the core with his disastrous performance with the ball. But he scored very well with his bat. But there are plenty of players to score runs in the squad as he is the primary bowler to the team.

So, for the next match, the Aussies might come with one change. Another pacer Richardson might replace Coulter-Nile in next match to bring more stability to the team.

By going through the statistics and numbers, we are going with Australia to win this match. Apart from all stats, their recent form and performance is very much better when compared to Sri Lanka.

But we cannot sideline Sri Lanka as they have the past history of shocking big heads.