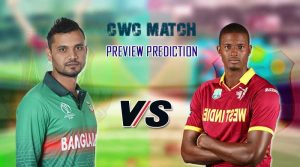 Both teams Bangladesh and West Indies scored a loss against England; these sides are in the same position in the points table with one win and another loss.

In the previous match, West Indies faced a loss against England as their bowling unit failed to reach the expectations and handed hosts a comfortable eight-wicket victory.

On the other hand, West Indies batting unit looks quite good as the likes of Chris Gayle, Bravo and Pooran will be looking to score big in this match.

And West indies expected a lot from the explosive batsman Lewis, Russell, and Hetmyer who has scored very less in their previous matches.

West indies bowling unit looked not so impressive in their last match against England. So they hope to continue their good work in the next match against Bangladesh.

After their last match was washed out due to rain against Sri Lanka, Bangladesh looks to make an impact in upcoming fixture against west indies.

All eyes are on Openers Tamim Iqbal and Sarkar who have looked in their previous encounter against England.

Bangladesh is expecting a lot from his all-rounder Shakib-Al-Hasan in this match. On the other hand, their bowling attack looks good with the likes of Mustafizur Rahman and Shakib. If they stay strong in this match, then it will be tough for west indies to survive the game.

After four washed out games in World cup, we might expect a clear full game in the form of Windies vs Bangladesh fixture. We might not expect any rain throughout the match. The overcast conditions also look good which might favor the match.

We might expect a flat pitch which might favor the batsman to score more runs in this match. This flat pitch provides a lot of swings which could be enough for the swing bowlers who could rattle the batting order.

According to weather and pitch conditions, the captain who wins the toss might choose to bat to gain the advantage of flat pitch and dew factor in second innings.

West Indies might lose the services of all-rounder Andre Russell who injured his knee during the match against England.

Another all-rounder Allen might replace the injured Russell. Apart from Russell, we might not expect any changes from the team management.

Liton Das might replace Mohammad Mithun as he does not perform well in the last match.

Apart from Liton Das, the rest of the team will remain same in this match.

By going through the analysis, West indies has a clear and dominant edge on Bangladesh in World cup matches. As far as concerned, Bangladesh has not been in great form which might provide an edge to West indies. So as per today prediction we are going with Windies to win this match.