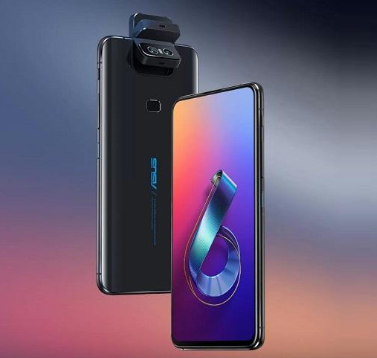 The Asus is now set to launch its new flagship device the Asus 6Z all over India at an event which is held at New Delhi. The Asus 6z is to feature a unique dual flip camera setup in it. The new smartphone is also the rebranded version of the Asus Zenfone 6 that was launched in Europe. This smartphone features a dual flip camera setup which is of 48MP + 13MP that it can be rotated by 180 degrees to act as both the rear cameras and also the front cameras.
The Asus company flagship is powered by the Qualcomm Snapdragon 855 processor, and the price of this Asus 6z is to start at EUR 499 in Europe which is around Rs. 38,800 for the 6GB RAM + 64GB storage model. The pricing and availability of the Asus 6Z in India will be unveiled at the launch event.

The new launch Asus 6Z is very much identical to the global model, and its biggest highlight is that the use of a motorized rotating camera which is on its rear camera, which can also be flipped to be used as the front camera. The other highlights of this device include the Qualcomm Snapdragon 855 SoC, which is up to 8GB of RAM, and also a massive 5,000mAh battery. Apart from this, it has a notchless full-HD+ display and a big thanks to the use of the rotating camera.

Along with the Asus 6Z a transparent phone cover is also bundled and this smartphone is the dual-SIM which is Nano and this Asus 6Z runs on Android Pie with the company’s Zen UI 6 on its top, and also the company reiterated its promise to upgrade the smartphone to the Android Q and the Android R once it’s available. This smartphone is also a part of the Android Beta program and this phone features a 6.4-inch full-HD+ that has 1080×2340 pixels IPS screen with a 19.5:9 aspect ratio, and 92 percent screen-to-body ratio, along with 600 nits peak brightness, a 100 DCI-P3 color gamut, and the Corning Gorilla Glass 6 protection. Asus 6Z is also powered by the octa-core Qualcomm Snapdragon 855 SoC, and also paired with up to 8GB of RAM and also the Adreno 640 GPU.

The new Asus 6Z’s dual camera setup has a 48-megapixel primary shooter which comes with a Sony IMX586 sensor. It has an f/1.79 aperture, and a laser focus module with a 1.6-micron pixel size using the Quad Bayer tech, along with a dual-LED flash module. As well as it had a 13-megapixel secondary ultra-wide-angle camera of 125-degree with the real-time distortion correction to fix the barrel distortion which is normally seen in the wide-angle cameras.

Share
Previous Call Of Duty Mobile – Release Date, Gameplay, Maps, and Other Details
Next How To Remove Virus From Android – Quick & Easy Steps – 2020